This painting will be included in Dr. Hiltraud Doll’s forthcoming catalogue raisonné on the paintings of Adriaen van Ostade as no. 11A.

In a barn interior, a group of peasants gathers round a musician, playing the bagpipes. In the foreground, a man, with his back to the viewer, lounges in the shadows on the floor and swings a beer jug to the strains of the pipes. Two others join in, singing and swaying in time to the music: the fellow in blue, stands and sings from a song sheet, while his seated companion, leans on a barrel and beats out the rhythm with his hand. Behind them a drunkard is slumped against the wall, oblivious to the merrymakers. Still life elements, including a string of onions hanging on the wall, a small brazier standing on the barrel and a basket, broom, copper cauldron and terracotta flagon, heaped in the right-hand comer, complete the rustic scene.

A Barn Interior with Peasants making Music is a fine example of Adriaen van Ostade's
early style and the type of low-life scene he produced during the initial phase of his activity. From a contemporary document and three dated pictures recorded in a sale catalogue, we know that Adriaen van Ostade's career was launched by 1632, although he did not register as a member of the guild for another two years. There is nothing tentative about this rustic interior which shows the young master's assured handling of paint and an impressive deployment of light and shadow. It can be compared with Peasants Playing Cards(1), also dating from 1633, now in the Hermitage, St. Petersburg and Drinking Figures and Crying Children (2) of the following year, in the Sarah Campbell Blaffer Foundation, Houston. All three pictures depict rowdy scenes with raucous peasant types, dramatic chiaroscuro effects and a surprisingly delicate, pastel colour scheme.

Although there is no proof for Houbraken's statement that Ostade and Adriaen Brouwer worked together in the studio of Frans Hals, there is no doubt that he knew Brouwer and his work. The style and subject matter of Ostade's early paintings reveal an unmistakable debt to the Flemish master, his senior by a few years, who resided in Haarlem until about 1631. Brouwer's expressive low-life scenes were the point of departure for Ostade's own energetic depictions of tavern and barn interiors, populated by peasants, wearing colourful rags, smoking, drinking, gambling, brawling, dancing, and music making, in settings of chaotic squalor. The soft blue, lilac and orange tints which appear in the peasants' clothing in A Barn interior with Peasants making Music are reminiscent of the cool, delicate colours favoured by Brouwer. Here, as in Brouwer's work, they are contrasted to the earthy brown, tonality of the background. Despite Brouwer's influence, Ostade's artistic personality soon asserted itself: his touch is more refined and precise than Brouwer's and the figures in his early interiors are generally smaller and less individualized. Characteristic of Ostade's early style is the broad rendering of facial features, which are often turned away from the viewer or half concealed beneath ungainly hats, as his reliance, on the body language of his peasant types to convey character and the boisterous nature of their activities. The dramatically spot-lit effect employed in the present work, which casts the foreground figure in deep shade and concentrates the light on the main protagonists, is typical of Ostade's expressive manner at this early date.

If the accuracy of Houbraken's biographical information is sometimes wanting, his appraisal of Ostade's work is aptly descriptive when he wrote of his"... interiors, with their ramshackle furnishings and inns and taverns complete with their trappings, which he was capable of representing as cleverly and realistically as anyone ever did", as well as "the figures in their costumes doing all sorts of activities, so naturally rustic and witty that it is astonishing how he was able to contrive it. (3)

Baptized on 10 December 1610, Adriaen van Ostade was the third of eight children born to a weaver, Jan Hendricx van Eyndhoven, and Janneke Hendriksdr. There is no documentary evidence of his training, but Houbraken states that he studied with Frans Hals around 1627. Although the latter's influence can scarcely be detected in Ostade's work, that of Adriaen Brouwer, who a pupil of Hals at the same time, is clearly recognizable. Van Ostade is first referred to as a painter in 1632 and was a member of the Haarlem St Luke's Guild by 1634. In 1636, he joined the militia company, Oude Schuts, and on 26 July 1638, he married Machteltje Pietersdr. of Haarlem. Two years later he was sued by Salomon van Ruysdael for non-payment of 14 guilders for tuition and board. In March 1642, Adriaen and his wife drew up a will: seven and half months later she died, childless, and was buried in St. Bavo's on 2l September. Ostade remarried on 26 May 1657. His second wife, Anna Ingels, was from a wealthy Catholic family and the artist may have converted at the time of his marriage. He and his new wife moved from the house he had purchased in 1650 on the Cromme Elleboochsteech to the Koningstraat. By August 1663 they were living on the Veerstraat. The couple had one child, Johanna Maria, whose date of birth is unknown, but Ostade became guardian for his sister Maeyken's five children in 1655 and his brother Jan's children in 1668. The artist was named hoofdman of the painters' guild in 1647 and 1661 and deken in 1662. His wife Anna died in 1666 and was buried in St. Bavo's on 24 November. Municipal documents from 1669 and 1673 indicate that the artist inherited a substantial amount from Anna and her father. By 1670 he was living in the wealthy Ridderstraat in Haarlem. Six days after witnessing his daughter's marriage on 21 April 1685 to a surgeon, Dirck van der Stoel, Ostade died: he was buried in St. Bavo's on 2 May. His daughter held public auctions of his works on 3-4 July 1685 and 27 April 1686.

Although he produced a few history paintings and portraits, Adriaen van Ostade was
primarily a painter and etcher of peasant genre scenes. In addition to paintings, this prolific artist produced about fifty etchings and numerous drawings and watercolours. Among his pupils were his younger brother, Isaack, Comelis Dusart, Comelis Bega, Michiel van Musscher and Jan Steen. 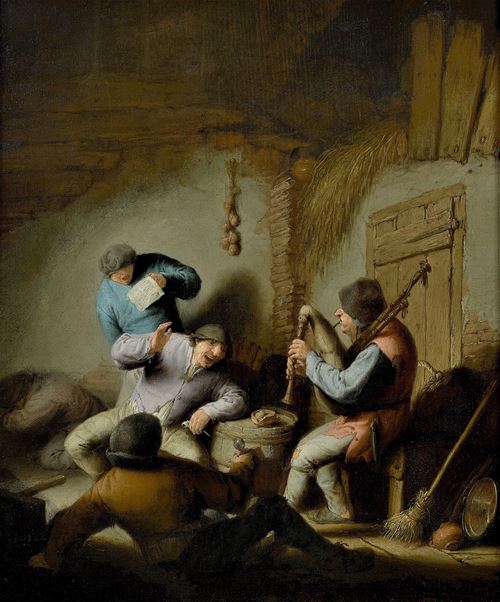 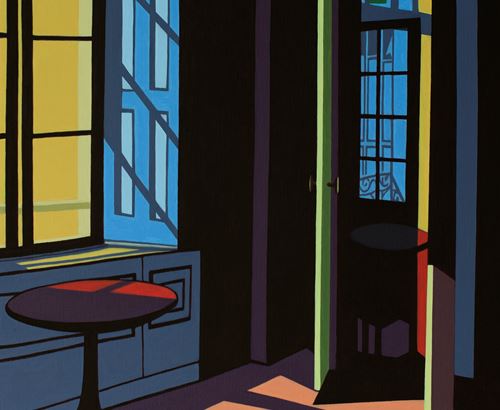 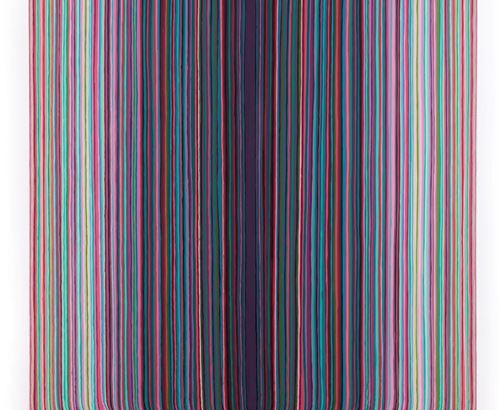 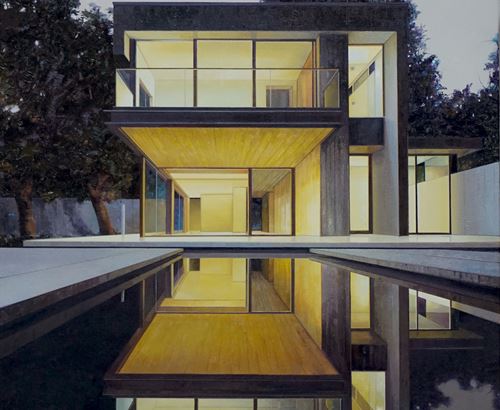 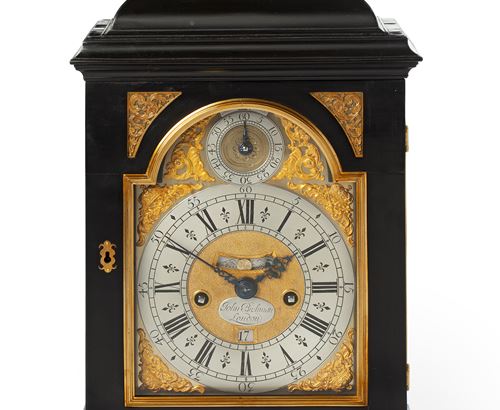 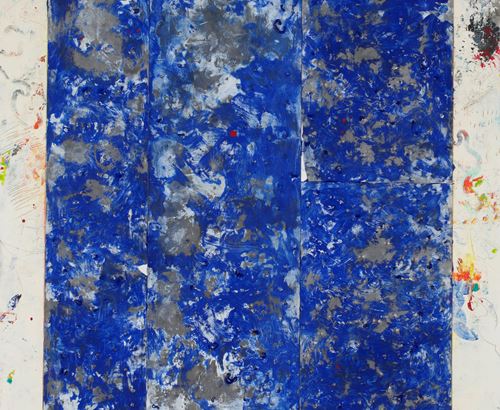 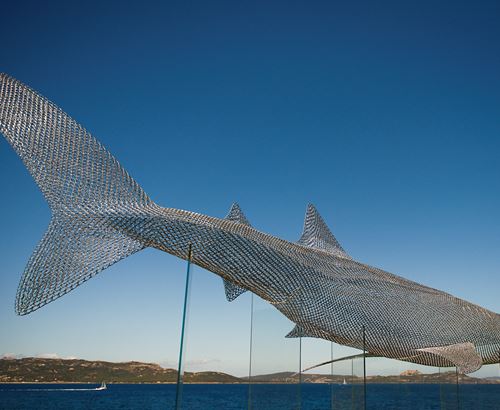